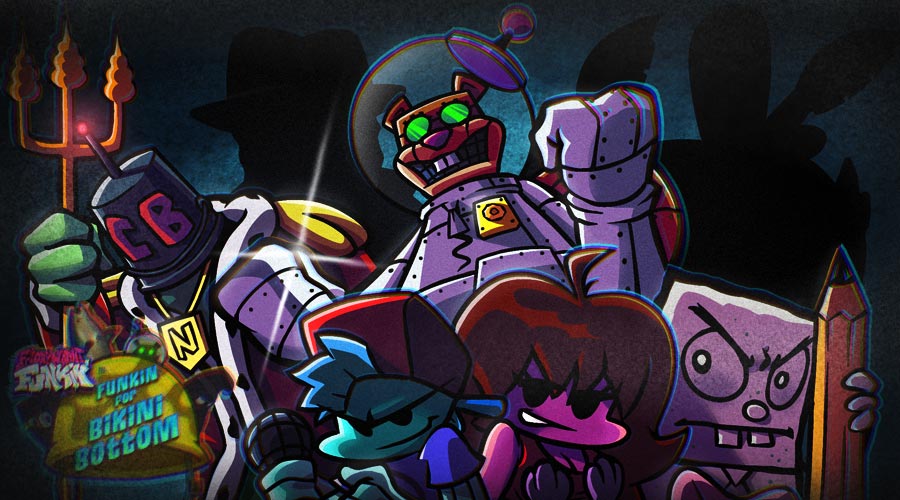 Dive in the world of SpongeBob with FNF: Funkin for Bikini Bottom and accompany Boyfriend on a breathtaking adventure! Breaking news: the residents of Bikini Bottom have been attacked by a huge metal robot, the local authorities seem overwhelmed by the situation but luckily our hero Boyfriend is there to solve the situation. Funkin for Bikini Bottom features a story mode song in which Boyfriend will battle against the terrifying Robot Sandy (the villain in SpongeBob SquarePants: Battle for Bikini Bottom) on the song "Nuts-and-Bolts". The Freeplay menu offers 5 additional songs against other characters. SpongeBob will sing against Nat Peterson during a rap battle on the song "On Ice", then it will be Boyfriend's turn to face a new adversary, Doodlebob (main character of Frankendoodle and Doodle Dimension in the Nintendo DS game Drawn to Life: SpongeBob SquarePants Edition) on the music "Doodle Duel". During the battle on the music "Plan-z" you play SpongeBob (yes he rocks on the guitar) and will face King Neptune. The song "P" will oppose SpongeBob and Boyfriend, under the dumbfounded gaze of Girlfriend in his boat. The last challenge for Boyfriend will be to win a rap battle against the terrifying Robo-Squidward, the song "Scrapped Metal" will be a big challenge!

You can download FNF: Funkin for Bikini Bottom from the Original mod page.