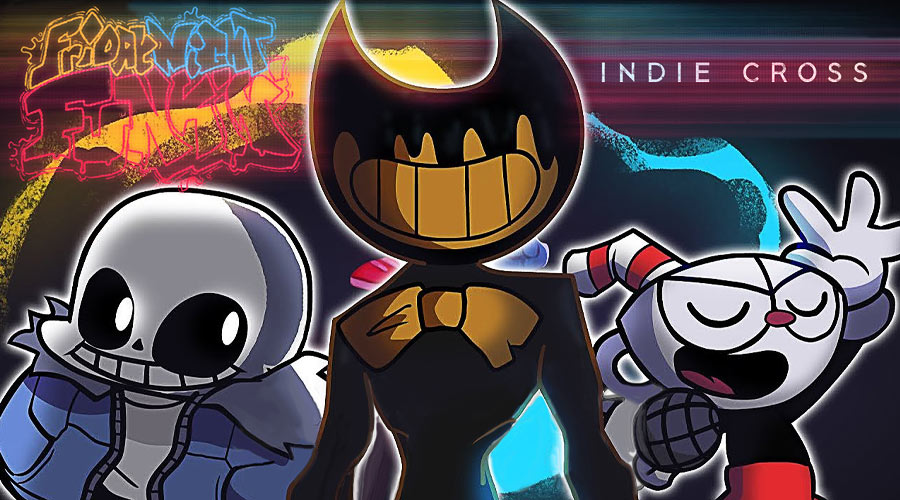 Iconic heroes from indie games have come together in FNF Indie Cross for Friday Night Funkin', an awesome and epic crossover mod including three full weeks featuring three songs each as well as many bonus songs in the freeplay menu. New game mechanics have been added as well as many high quality cutscenes. Animations and other winks will punctuate your fantastic musical adventure.
Boyfriend's first opponent will be Cuphead, the main hero of the platform game created by the Studio MDHR. He will challenge you during a rap battle of three song ("Snake Eyes", "Technicolor Tussle", "Knock Out") in a retro atmosphere faithful to the game. You can recognize Cuphead's Floral Fury level in the background, be careful to dodge the magic rays and counter-attack Cuphead with your microphone at the right time!
For his second duel Boyfriend will have to face Sans (hero of the independent game Undertale created by Toby Fox) in three grandiose rap battles on the songs "Whoopee", "Sansational" and "Final Stretch". Here too, you will have to dodge bones attacks when a danger signal appears. You will also have an attack, follow your own path to perhaps discover a secret!
Boyfriend's third and final opponent will be the legendary Bendy, hero of several Joey Drew Studios creations and also world famous for the game and song of the same name Bendy And The Ink Machine! Here you will have to face off against Beast Bendy (Bendy after his transformation) on the music "Imminent Demise", "Terrible Sin", "Last Reel" and "Nightmare Run". The furious beats will be the ultimate challenge of this week, be focused because Bendy will for sure try to distract your attention!
But that's not all, in the freeplay menu you will have access to 7 new music to prolong the pleasure and discover other masterful compositions.

You can download FNF Indie Cross from the Original mod page.