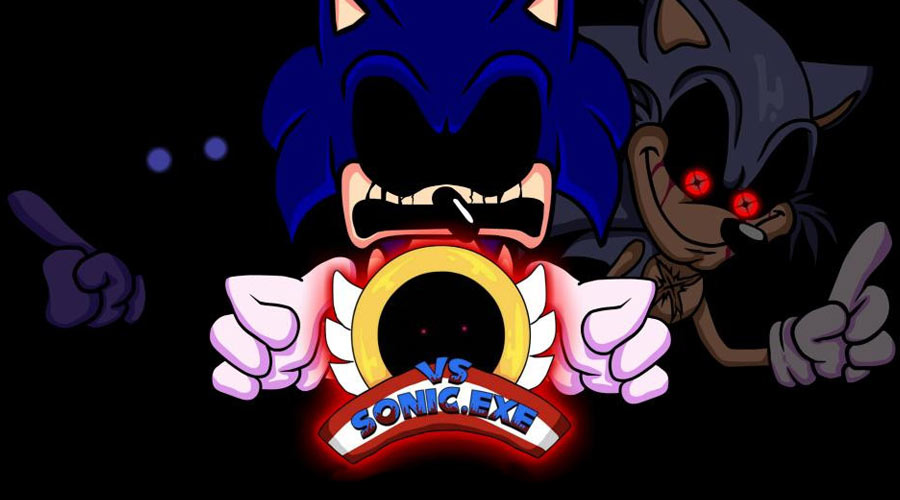 The mod FNF Vs. Sonic.Exe for Friday Night Funkin' will offer you to face in a rap battle a mythical and legendary character, Sonic.Exe, a mysterious version of the famous blue hedgehog that raises many questions about its origin. Many theories and creepy stories (creepypasta) have sprung up about the creation of the evil version of Sonic but it's actually a fan game developed by Crimson the Bat in 2012. After impaling his friend Tails' head on a wooden stake Sonic.Exe will offer Boyfriend a song duel in a strange and gloomy atmosphere. Try to keep the pace and your concentration despite the strange events that will occur, if you manage to win the battle a surprise will await you in the main menu of the game. With this mod RightBurstUltra and his team have managed to pay a faithful tribute to the legend surrounding the character. The dark atmosphere, the game menus identical to the "original CD-rom" as well as the new songs will immerse you directly in the very special atmosphere of the universe of Sonic.exe.

Vs. Sonic.exe 2.0: This major update for the mod brings many features including 7 new songs that you can discover thanks to a complete story mod divided into several acts. Face off against Sonic.exe, Beast Sonic, Tails, Knuckles and Eggman on epic songs accompanied by animated cutscenes. Full of references and nods to the world of Sonic video games will be present!
In FNF Vs. Sonic.exe V2 you will also be able to find many secrets! In the "Sound Test" menu on the home screen enter the following codes to see extras:
0-0 / 6-6 / 9-10 / 1-13 / 12-34 / 23-23 / 32-8 / 41-1

You can download FNF Vs. Sonic.Exe from the Original mod page.