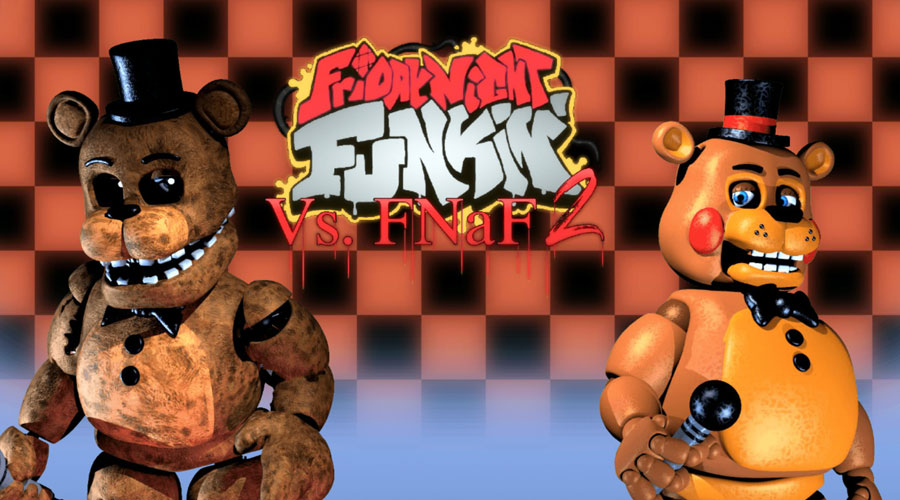 FNF Vs. FNAF 2 is another mod for Friday Night Funkin which is a prequel to the previous mod, the action taking place before the events of the first episode. Pouria_SFMs and his team once again offers us a powerful hit with many new songs as well as 3D graphics and animations.
Boyfriend and Girlfriend were looking for a pizzeria at midnight because they were hungry and they found themselves in this strange restaurant. The problem is that nobody sells pizza at this hour! Our two friends find themselves trapped in the pizzeria, even worse, they are chased by terrifying animatronics. FNF Vs. FNAF 2 gives you three full weeks. Boyfriend will have to face different opponents in 4 rap battles in Week T, 4 songs in Week W and 3 battles to complete the story in the Week Finale. But that's not all, for ever more challenges, 9 bonus songs await you in the Freeplay menu. FNF Vs. FNAF 2 offers many minutes of play in an atmosphere very faithful to the series Five Nights at Freddy's.

You can download FNF Vs. FNAF 2 from the Original mod page.

Note: For the moment the option menu is bugged, it will be available soon. The bonus song "Challenge Fredd" will also be added soon.