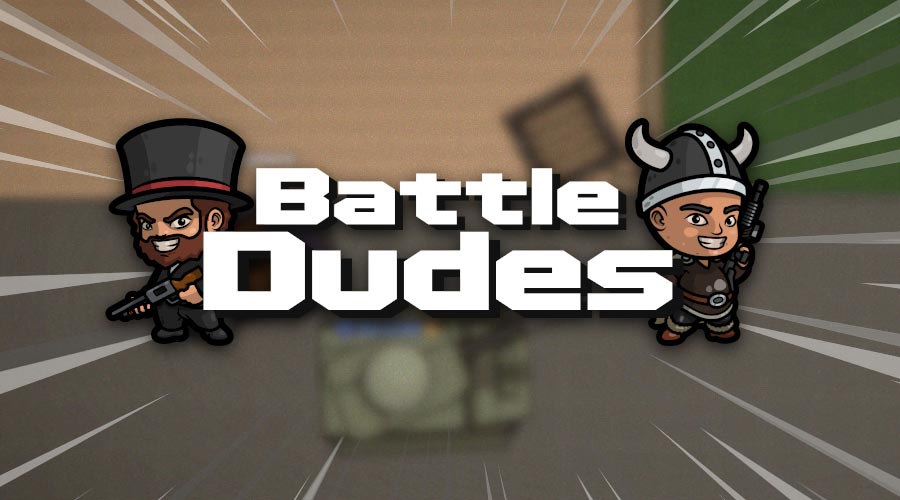 BattleDudes.io is a 2D multiplayer shooter that will pit two teams against each other on fully destructible maps. Several game modes are available but also 4 different weapon categories (main, secondary, launcher and special) as well as vehicles (cars and tanks). Fight on many maps and try to complete different objectives to help your team scoring points. Each game lasts 7 minutes, the winner will be the team with the highest score at the end of regulation time. BattleDudes.io is a cooperation game, you will have to coordinate with the other members of your team to achieve the objectives and gain the advantage over the enemy team.

What are the game modes of BattleDudes.io?- Hold Point: Control and defend a single point on the map for as long as possible to increase your team's score.
- Capture The Flag: Capture the enemy team's main computer and bring it back to your base to score points.
- Team Deathmatch: Eliminate players from the opposing team to score points.
- Conquest: Capture and hold multiple points on the map to increase your team's score.

What are the tips for BattleDudes.io?- On large maps, do not hesitate to use vehicles to cover distances more quickly. The Jeep has two seats, a driver and a second player who can shoot enemies. The tank has only one place but can fire powerful rockets at these targets.
- Change weapon according to each situation. The primary weapon will be ideal for facing your enemies at medium range, the secondary weapon will be effective at close range. The bazooka is an effective way to destroy vehicles (one shot for Jeeps, two shots for tanks). The C4 will do great damage to vehicles, and grenades will be lethal to other players.
- Each element of the map is destructible!
- By creating an account on the game, you will be able to gain experience and save your profile. Each level will unlock a new weapon, there are more than 20. You can also customize your avatar, choose emojis and have access to detailed statistics.