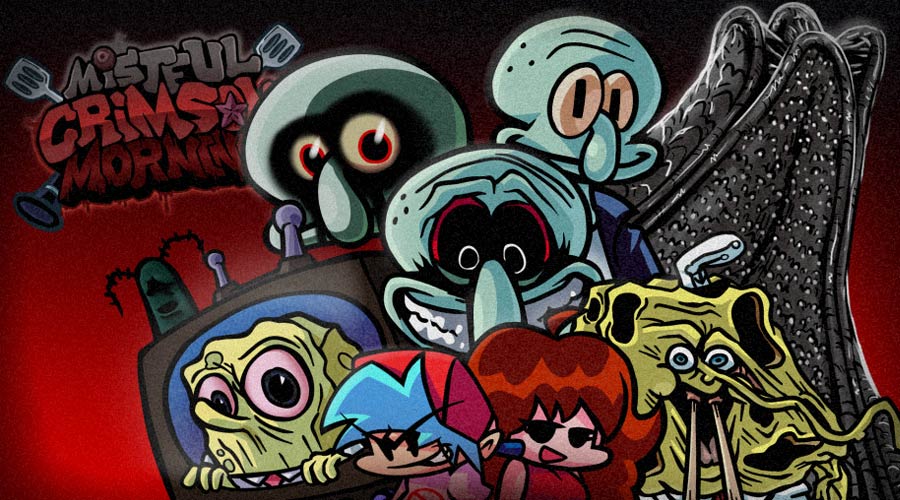 In the mod FNF Vs. Mistful Crimson Morning, Friday Night Funkin' meets the world of SpongeBob SquarePants and Boyfriend will have to face many challenges against several heroes of the famous cartoon network show. But the heroes that Boyfriend will face are plagued by corruption, Mistful Crimson Morning is based on the popular Creepypasta Squidward's S* and offers you no less than 13 songs against adversaries with a keen sense of rhythm. In the story mode Boyfriend will participate in three rap battles against Squidward Tentacles on the songs "Humiliation", "Mist" (watch out for gunshots!) and "Doomsday". In the Freeplay menu you can play 10 bonus songs against other heroes from the SpongeBob series or even Robot Chicken or the character from the MeatCanyon youtube channel. It's a complete mod whose development was canceled at one time but which is now available for everyone's pleasure thanks to its many successful musics.

Mistful Crimson Morning V2 Cancelled Build: This update is the final version of the mod. After long months of development and multiple cancellations, you will finally be able to discover all the music as well as quality remasterings for certain songs. The mod offers 4 new rap battles with the songs Bold or Bash, Propaganda, Evader and Failure. The sprites of the song Sanguilacrimae have been changed, Served is now longer and the music Satisfaction has been completely remastered.

You can download FNF Vs. Mistful Crimson Morning from the Original mod page.